The Heart of Texas Healthcare System is a 25 bed Critical Access Hospital located in Brady, Texas. The hospital features a wide range of services to meet all of your health care needs. In addition to the hospital, we offer a DME store, Rural Health Clinic, a Geri-psych unit, and more. We are here to serve you. Quality is the cornerstone of everything we do.

In the early 1970’s, the McCulloch County Hospital Authority was formed. The Authority was a political subdivision of the State of Texas and a not for profit, non-taxing, hospital provider. The Authority Board rallied the community to support building a new hospital facility and by 1973 Brady was home to a new healthcare facility.

Through the 1970’s into the late 1980’s, the hospital prospered and provided care to the residents of McCulloch County and surrounding areas. In 1989, due to reimbursement changes and increasing county indigent healthcare expenses that were the responsibility of the local Commissioners Court, a hospital district was formed. This removed the financial burden for the county indigent healthcare program from the Commissioners Court and the newly formed District was allowed to levy a tax to help offset indigent healthcare expenditures. In 2004, once again due to detrimental reimbursement changes made by Medicare and Medicaid, the hospital district board had the foresight to license the hospital as a Critical Access Hospital (CAH). The CAH designation provided cost based reimbursement to the hospital for services rendered to Medicare and Medicaid recipients. This designation also prompted the district board to begin talks of renovation and expansion of the early 70’s physical structure. This was a progressive endeavor as the existing facility had suffered much depreciation, dilapidation, and estimates to repair were greater than 50% of the cost to build a new patient care area. This project utilized the existing facility for various support services through renovations of the former 1970’s facility. This was financed with a USDA loan guarantee with the cooperation of local banks. The debt of the new structure and associated renovation costs were financed with revenues derived from operations which did not require an increase in district property taxes, nor a general obligation from the property owners. The new facility opened in early 2012, and the outpatient dialysis center began serving residents in early 2014.

In 2011 the district board leased the operation of the healthcare facilities to Heart of Texas Healthcare System, a local not for profit entity. The Districts 1989 enabling legislation allowed for such a lease and this decision provided for operational flexibility to increase funding through various healthcare payment programs. Such funds have been used to increase services provided locally, help partially offset over $2,000,000 in annual uncompensated care, and allowed for renovations of the early 70’s physical hospital structure, without costing the taxpayers. The District and Hospital System recognized this collaboration would be in the best interest of the communities served by both, in order to access amplified funding to which the Hospital is entitled under the various State and Federal healthcare programs. The rent paid to the McCulloch County Hospital District by The Heart of Texas Healthcare System helps service the debt of the construction costs associated with the 2012 new patient care facility.

The regional area hospital district tax rate average for surrounding counties is $.33, which places McCulloch County nearly three times less than the regional average tax rate; yet another cost advantage to the local businesses and property owners of McCulloch County. Another benefit to the property owners of McCulloch County afforded by the lease structure agreement is a decreased dependency on tax dollars needed to partially offset indigent health care costs. As a result, the hospital tax rate has decreased from $.16 to $.12 in the past ten years. Without the public/private partnership between the District and the Hospital System, the district tax rate would likely be closer to the regional tax average of $.33, due to the $2,000,000+ in annually incurred uncompensated care.


Hope from the Heart

In an effort to raise additional funds for the charity, Hope from the Heart hosts several events throughout the year. The largest of these fundraisers is the benefit auction and dinner that is held every year on the Saturday before or on Valentine’s Day in February. The 2019 event, will be held on February 9th. This event alone has brought more than $72,000 in donations; which is an amazing feat for a community with a local populous of less than five thousand. A portion of the proceeds are donated to The Heart of Texas Healthcare System to purchase cancer related equipment. The Hope from the Heart organization understands the significance of supporting not just the illness, but also the soul.

Starting in 2013, Hope from the Heart honorably has received grants up to $20,000 from the G. Rollie White foundation. The organization also benefits from a Color Run during the month of October sponsored by Premier Silica and from Pink Out games sponsored by various high schools throughout the county. Donations such as this provide a large financial boost to the overall support efforts of the organization. In order to continue supporting our local cancer patients, we need continued support from people like you. Every donation that we receive helps bring hope to the lives of those who need it most.

For more information or to make a donation, please call:

Alternatively, you can donate to Hope from the Heart via Paypal: 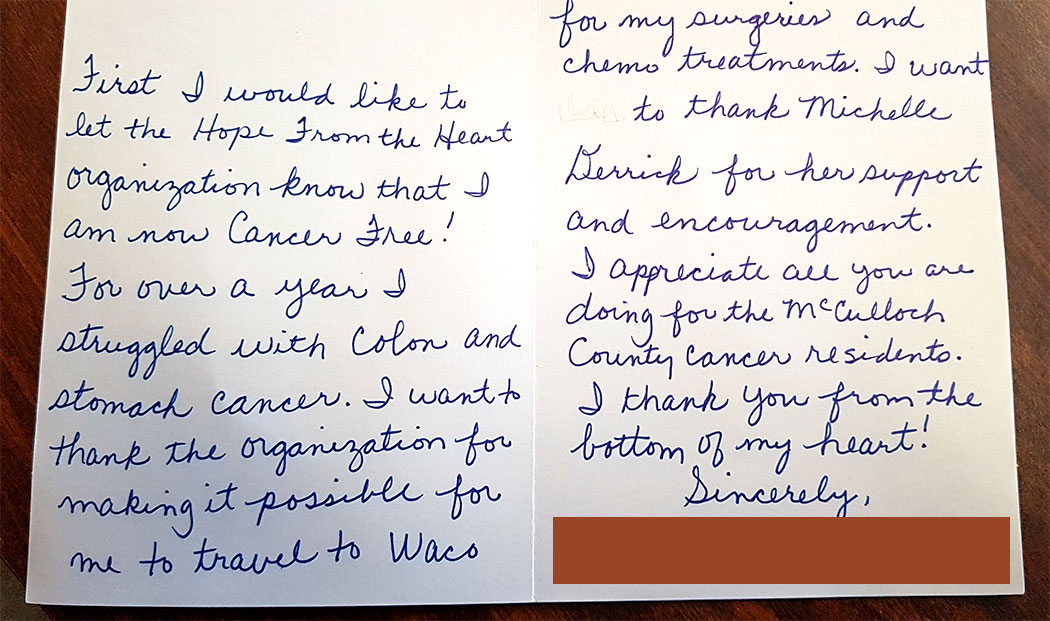 The goal of the Heart of Texas Memorial Hospital Foundation is to raise sufficient capital funds to supplement the income of the Heart of Texas Healthcare System and decrease the need for tax support in McCulloch County. The supplemental funds collected assist the hospital with viability and ensure you and your loved ones have the availability of exceptional care.

In order to make the foundation goals a reality, we need your support. Memorial donations, will bequests, insurance policy proceeds, and tax-exempt gifts are all accepted means of support. The funds you donate will be used to preserve our hospital, our community and our quality of life.

Our most recent campaign was the New Beginning Campaign. The funds that we raised went toward the purchase of digital medical equipment in order to bring state of the art diagnostic and scanning services to the citizens of McCulloch County and surrounding area. Through this campaign we raised a total of $509,175 with board members and employees contributing $77,600. In the future, similar campaigns will help us continue to improve our facilities so that we can continue to provide the best possible care, close to home.

The Heart of Texas Healthcare System holds quarterly community service events for staff members and volunteers. We believe that giving back to the community is just as important as providing quality healthcare to its citizens.